T&S have lodged their second appeal against the refusal of a new intensive rabbit farm in Cornwall. Their plan is to exploit 250 female rabbits to produce upwards of 10,000 rabbits per year for the meat and fur industry.

The appeal can be viewed here: https://acp.planninginspectorate.gov.uk/ViewCase.aspx?caseid=3283175

To send your representation online, click “Make Representation” in the top right of the page and follow the prompts on screen.

Please note that all representations must quote the appeal reference APP/D0840/W/21/3283175 and must be received by the Planning Inspectorate by the 8th March 2022.

All of the original points to object still stand, and we have included a few more which have become more relevant since the original application. Please feel free to use these to help you form your objection in order to make sure that your objection is considered. Remember that unfortunately, moral objections do not hold weight in planning objections, but that doesn’t mean that you shouldn’t voice your moral concerns alongside any “valid planning considerations.” Ask for welfare to be made a material consideration during review of planning permission applications involving animals, particularly as there is NO species-specific legislation protecting the welfare of rabbits in the UK.

– The proposed location can only be accessed via a largely single track lane, very narrow with minimal passing places. It is primarily used as a public footpath to the beautiful tourist location of Mylor Bridge and the popular Pandora Inn. Delivery and refuse disposal lorries would create havoc for local residents and tourists who use the track, not to mention put walkers, cyclists and horse riders in danger.

– The proposed location is near Tregunwith Wood, an area of outstanding natural beauty (AONB) and the proposed farm would by no way be in-keeping with this. The building of a rabbit farm would fail “to enhance the visual amenity of the countryside or character of the AONB” (ref: Cornwall Council Local Plan 2011 – 2030).

– The proposed location will border the south-western shore of Restronguet Creek, and there is nothing in the proposal outlining how the creek will be protected from waste run-off from the farm.

– The proposed area is a known home to protected wildlife, including nearby badger setts, as well as otters, bats, ospreys, kingfishers and countless wild birds. The noise is likely to drive them away, if the plans do not destroy their homes anyway.

– No ecological appraisal has been conducted.

– There is no mention of how the rabbits shall be slaughtered. There are currently no slaughterhouses in the UK licensed to slaughter rabbits. If the plan is for to be slaughtered on site, there is nothing in the proposal outlining how waste from this process shall be disposed of, ie. blood and offal, nor how it will be ensured that none of this waste will contaminate the surrounding area.

– If slaughtered on-site, the rabbit meat will only be allowed by law to be sold within Cornwall and the adjoining counties (or no further than 50 kilometres from Cornwall’s border.) If more than 10,000 are killed a year it will contravene government regulations – so this needs close monitoring.

– There’s also the question whether ‘agricultural use’ can really stretch to include slaughtering.

– The production cap of 10,000 rabbits per year, for ‘small-scale suppliers’ means the applicant is exempt from the Food Standards Agency (FSA) rules for monitoring and reporting. Without FSA oversight with the presence of an Official Vet (OV) and CCTV monitoring in all areas where animals are present, there would be no day-to-day oversight of animal welfare, meat hygiene, food safety or safe waste disposal.

– There is no demand for rabbit meat in the UK, most people are repulsed at the thought of consuming it. As rabbit farming is something which is highly frowned upon in current public attitudes, the farm would attract protests and unwanted attention, disrupting local life.

– If rabbits are also to be sold as “pets” as suggested by the financial information provided, which is projected to make up 10% of the farm’s income (as stated in the case officer’s report), a licence must be applied for and granted by the council in order to do this following the implementation of Lucy’s Law.

– There are no measures outlined on how they intend to combat the spread of disease in the rabbits. There are no specific drugs licensed for use in rabbits in the UK, due in large to the lack of commercial rabbit farming here. There is also no mention of vaccinating the rabbits against the fatal, incurable diseases Myxomatosis, VHD and VHD2. Myxomatosis has been noted to be rife in the local wild rabbit population by the immediate neighbours of the site. There have also been documented outbreaks of VHD2 on Mr. Kerry’s other farms.

– There has been huge public outcry regarding recent proposals for rabbit farms – tens of thousands have sent objections, signed petitions and attended demonstrations against them.

– There is no species-specific legislation in place to guarantee even minimum enforceable welfare standards for rabbits.

– There is a question of whether these farms are an attempt at fur farming ‘through the back door’ – the T&S website mainly advertises highly priced fur products which appear to generate the vast majority of their income. A recent yougov poll revealed that the vast majority (93%) of people in Britain don’t wear real animal fur and support a Fur Free Britain.

You can send an objection whether you objected to the original application or not, so please join in and take a few minutes out of your day to put a few words together if you are able. 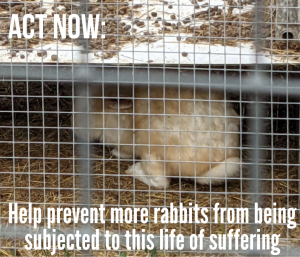 For the rabbits, thank you!